Summer 2019 has officially started if you still haven’t booked any holidays and you are a tennis lover here are some exclusive holiday resorts with tennis courts that Aceify wants to share with you: 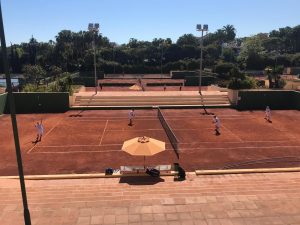 The Puente Romano Tennis Club, it is one of the most sublime places in the world. The Club features 10 tennis courts- 8 beautiful clay courts and 2 hard courts made of plexipave, a versatile synthetic material suitable for players of all ages. The Tennis Club has welcomed many of the top competitive players in the world, including Novak Djokovic, who has a house in the area and sometimes plays here. 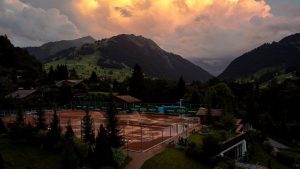 If you are looking for a place where to play a match and enjoy the breathtaking view over Gstaad and the surrounding mountains Gstaad Place is what you are looking for. This is the place where the Swiss Open happens every year. During the summer season, there are four tennis courts right outside the hotel where you can play and get the chance to train with one of the most successful tennis players: Roy Emerson.

The Belmond La Residencia is located in the charming artist village of Deià, Mallorca between mountain and sea. This luxury 5-star hotel includes an acclaimed restaurant, a unique spa, two external panoramic pools and two tennis courts surrounded by the spectacular Tramuntana mountains and look over the Mediterranean Sea. There is also a resident tennis coach. 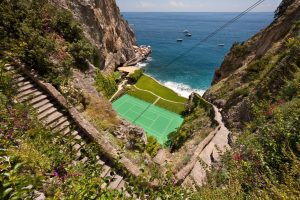 Il San Pietro’s tennis court lies between the rock face and the Mediterranean on the Amalfi Coast. This stunning court reserved only for guests giving players the unusual pleasure of playing by the sea. This 5-star luxury hotel offers a bar with a spectacular terrace overlooking the lights of the village, a gourmet restaurant, fabulous terraced gardens, and a private ‘beach’, spa and a casual-chic beachside. restaurant. 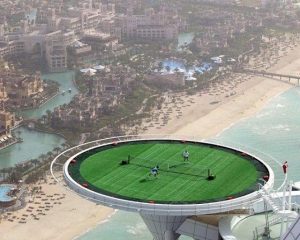 In 2005 Dubai’s 5 stars hotel Burj Al Arab hosted a match between Andre Agassi and Roger Federer on its helipad court. Sadly it’s no longer a tennis court, but it’s still worthy of inclusion though as one of the world’s most amazing courts for a spot of tennis.