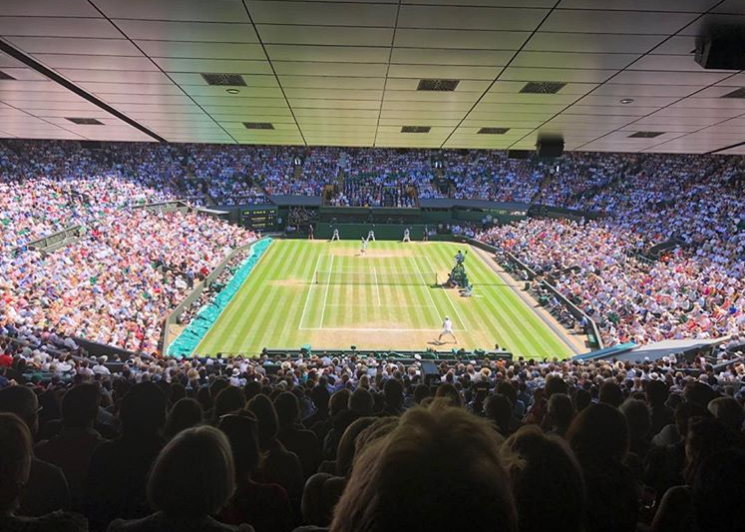 A strange calm has descended on the Aceify office this morning. For the last two weeks, we have been totally obsessed with Wimbledon. It is now all over and we can now reflect on the last two weeks action. Wimbledon this year was blessed with perfect conditions. In 2018 many of the matches were playing in blazing 30-35 degree heat. The final itself was played on one of the hottest days of the year. An already tired Kevin Anderson could hardly move. No such issues this year. The whole fortnight had almost perfect conditions. 20-25 degrees, sunshine with a few clouds. Hardly any rain! We barely even saw the new roof on number 1 court.

So what are the highlights this year?

Here are some top contenders for talking point of the tournament:

So let us review these ones by one.

Coco Gauff London went Coco Crazy for a while. The Aceify team saw her 3rd qualifying match live and we knew this was coming. She won the 3rd round of qualifying very comfortably 61 61. It seemed to us she could do some damage in the main event. And we were right.  The first main draw match was Venus Williams. Given that Venus was one of Coco’s heros it was to be expected that she might be feeling some nerves? Wrong. From the first to the last ball she was flawless, absolutely flawless. Granted it was not vintage Venus but Venus had actually had a good run into Wimbledon winning twice before losing to Ash Barty in Birmingham. However, Venus looked to be totally outclassed by the teenager. This was followed by a classy second-round win against Magdalena Rybarikova. The 3rd round was another win for Coco. The level seemed to have dropped off however in this one and Coco was fortunate to come through. the match looked to be over however Polona Hercog choked when closing out the second set. This gave Coco a lifeline which she gladly accepted. The 4th round was a step too far at this point. Coco was not able to stay with Simona Halep who raced to a 6-3 6-3 win. This is no disgrace and actually, a better score than Serena managed against Halep in the final. Overall Wimbledon 2019 was a break-through moment for Coco. We feel sure she will one day lift the Wimbledon trophy. We love her humble and energising attitude and wish her all the best!

The men’s final did not disappoint. It is a real shame you can’t have two winners because both guys deserved to win. This was the longest final on record. 5 sets, 3 tie breaks and match points for both players. The tension at the end of the 5th set was so bad that we had to actually watch cricket at one point. Federer seemed to be dominating the match but still lost. Djokovic is one of the mentally toughest sportsperson we have ever seen. The passing shot on match point was epic. The margins to victory were slim but the only thing we can say is that Novak was a very brave fighter. Looking at the stats for the match it is strange that Federer lost. Most of the numbers are in his favour. But give some credit to Djokovic he won most of the big points. he raised his game in the tie breaks. he raised his game on the two match points that he faced. 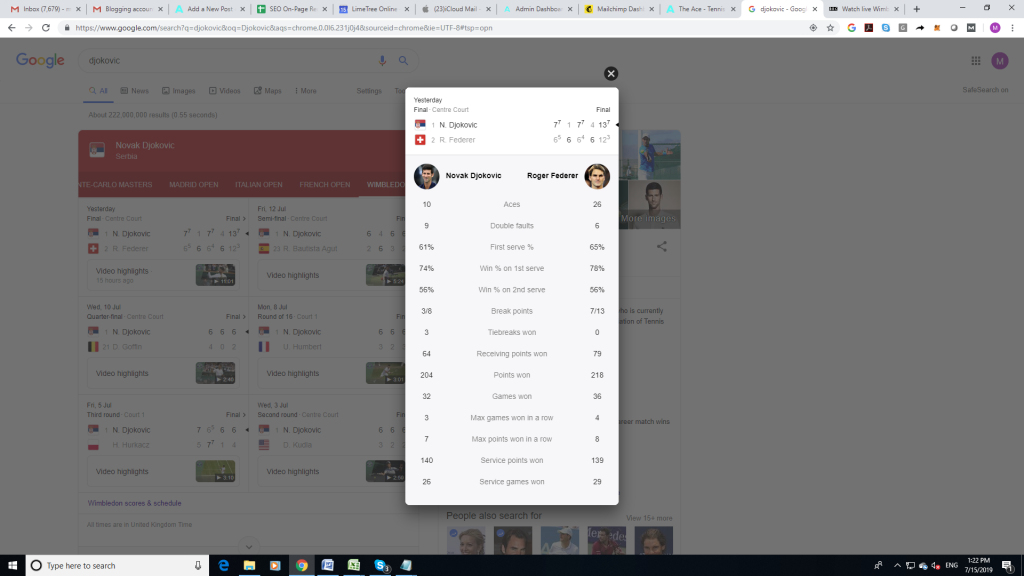 Could this be the talking point of the year? It is a strong contender.

Djokovic has now won 5 Wimbledon’s equalling tennis legend Bjorn Borg. Borg was seen as one of the greatest grass court players of all time. To see Novak equal his Wimbledon titles is an amazing achievement. Let us not forget the age of Novak. He is now 32 which used to be considered quite old for a tennis player. The current big 3 are changing the world’s perception of what a guy in his 30s can achieve in sport. Also, this win takes Novak to 16 grand slams. Federer is on 20. Had Federer won Wimbledon 2019 we feel that at 21 he would have been hard to catch. We now think that Novak will catch him up eventually. Will Novak win another 4 in his career? We think he will. Will Federer win another? We think that he might not. To get to 20 is amazing but do we think a guy who is pushing up towards 40 can win 7 x 5 set matches? In all honesty, it is getting increasingly unlikely. We hope we are wrong but we don’t see Federer winning another grand slam. This may have been his last chance. No chance in the French. Wimbledon 2020 is probably his best chance but we don’t expect that. Surely Novak is now favourite of the US Open. Most likely winner of Wimbledon 2020? It’s Novak. Would you bet against him winning the Australian 2020? We would not. Bravo Novak!

Halep is quoted as saying this was her ‘chilled out year’. It seems that chilling out really works for the Romanian. This was one of the most one-sided ladies finals ever. 6-2 6-2 in 54 mins. 3 unforced errors in the match. Lightening fast court speed. Halep loved the big-hitting Serena. The big serve of Serena was turned into some of the best returns we have ever seen. We really thought Halep was a different level to the other Ladies this year. Halep’s victory is also a first Wimbledon title from a Romanian and so extra special.

Federer is a true legend of the sport and transcends tennis. Never has there been a more graceful player. The great man is about to turn 38. Most players are firmly in retirement by 38 and not having match points in the Wimbledon final. If he had been able to convert either of the match points there would be no debate about the talking point of the tournament. Even as the beaten finalist the case is strong for him. He is making history even in defeat. 12 finals, 8 wins. The guy is nothing short of a legend. We hope to see him back in 2020 and beyond!

So after much deliberation, we are going with these 3 as the top talking points in 2019: